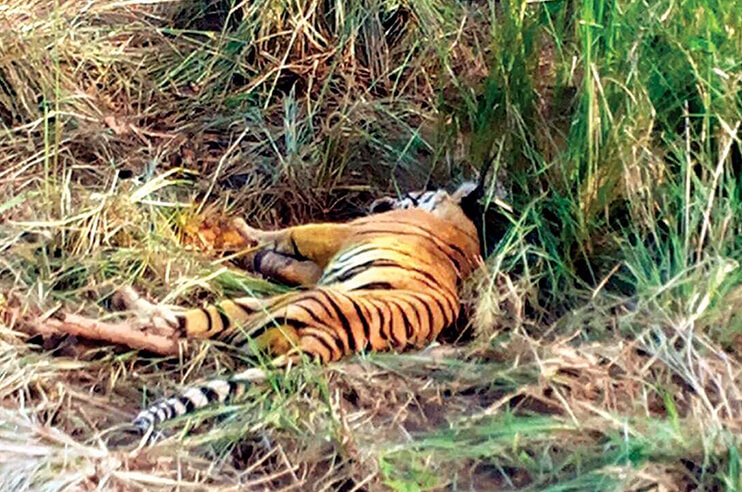 While Maharashtra has performed impressively in the field of tiger conservation, with its tiger population increasing from 190 to 312 in four years, tiger deaths continue to be a matter of concern for wildlife activities and those involved in tiger conservation. The latest case is that of a young tigress which was found dead in the Chandrapur district of Maharashtra. Officials suspect poisoning to have been the been the cause of her death. The carcass of a dead wild boar was also located in close proximity. This case again calls our attention to the issue of tiger human conflict.

What caused the death of the tigress?

The carcass of the tigress, who is estimated to be around four years old, was found in a cotton field in the village of Bedgaon. The nearest forests to the site where the tigress was found dead are located in Maharashtra (about 6km away) and Telangana (about 10km away). Forest officials believe that the tigress had wandered off from her habitat into a human habitation, thereby resulting in man-animal conflict. Conflicts between tigers and humans occur when the tiger enters a village or any other landscape inhabited by humans and prey on their livestock. Although officials suspect that the tigress died after she consumed the meat of a boar which was poisoned, suggestions involving poaching have been ruled out, since the carcass was found intact without any signs of external injury.

Here’s what the officials have to say

SV Ramarao, senior forest official and Chief Conservator of Forests, Chandrapur circle, commenting on the matter, said, “The post-mortem revealed that prima facie, the cause of death was poisoning. A wild boar carcass was found nearby. The poisoning could be “intentional or unintentional”.

He further added that the tigress may have died due to poisoning since the field where she was found dead was sprayed with insecticides. He went on to say, “It is possible that the pesticide may have flown with the water run-off after the rains as we found some water puddles nearby. This may have poisoned the carcass. However, the pieces of meat recovered from the tiger's intestines will be sent to the Regional Forensic Science Laboratory (RFSL) at Nagpur for toxicology and histopathology analysis”.

Shedding light on another aspect of the matter, the official said, "Another worrying aspect was the presence of the tigress in an area, which is around 6 km and 10 km respectively from the nearest forested patch in Maharashtra and Telangana. The landscape is fragmented with human habitation, and the tigress would have been able to hide in cotton fields, eventually bringing her into conflict with people.

Was the tiger from the area or did it migrate?

Increasing tiger deaths a cause for concern in Maharashtra

With the death of this tigress, the number of tiger deaths in Maharashtra has risen to 12 this year. Earlier this year, a female tigress and her two sub-adult cubs were found poisoned in Brahmapuri in Chandrapur. Two cases of poaching were also recorded. These occurred at Tipeshwar Wildlife Sanctuary and Tadoba Andhari Tiger Reserve. The state recorded 21 tiger deaths in 2017 and 20 in 2018.

The Central Chanda forest division where the tigress was found dead, is home to around 16 tigers. It lies in close proximity to Tadoba Andhari Tiger Reserve (TATR) and Bramhapuri forest division, which have around 90 and 40 tigers respectively. The highest density of tigers results in conflict with the human population in the area.

There are six tiger reserves in Maharashtra. The 2014 tiger census revealed that India was home to 2,226 tigers, while the Tiger Census 2018 revealed that the tiger population in India had increased to 2,967.